“We need to start looking at our province through the lens of a tourist. When we do that, we will appreciate the things that we have.” – Pete Stoddart

As New Brunswick’s population grows, locals are seeing their own backyard through a new lens – and according to Pete Stoddart, an outdoor enthusiast and consultant for the New Brunswick Department of Tourism, Heritage, and Culture – once people explore the Saint John region, a realization sets in that we have some of the most unique wildlife and outdoor adventures in North America.

“I would say one thing that we have here is the seasons never close,” Pete said. “If you’re more of a generalist you really can participate on some level all year round, and that is fairly unique.”

Pete’s love for the great outdoors started as a child and throughout university he began hunting and exploring more. Having spent the last 20+ years in the restaurant world, getting outdoors was a place Pete went for relaxation. Whether he is standing in a river, in a tree, on a mountaintop, or scrambling through the bushes – it’s all near his home in the Saint John region.

“A couple of weeks ago, I drove from the top of the province to the bottom – almost four hours,” he said. “You end up in the middle of nowhere on this unbelievable lake that’s full of giant Lake Trout and it’s a stone’s throw away. I don’t think many people have any idea what we have in our backyards.” 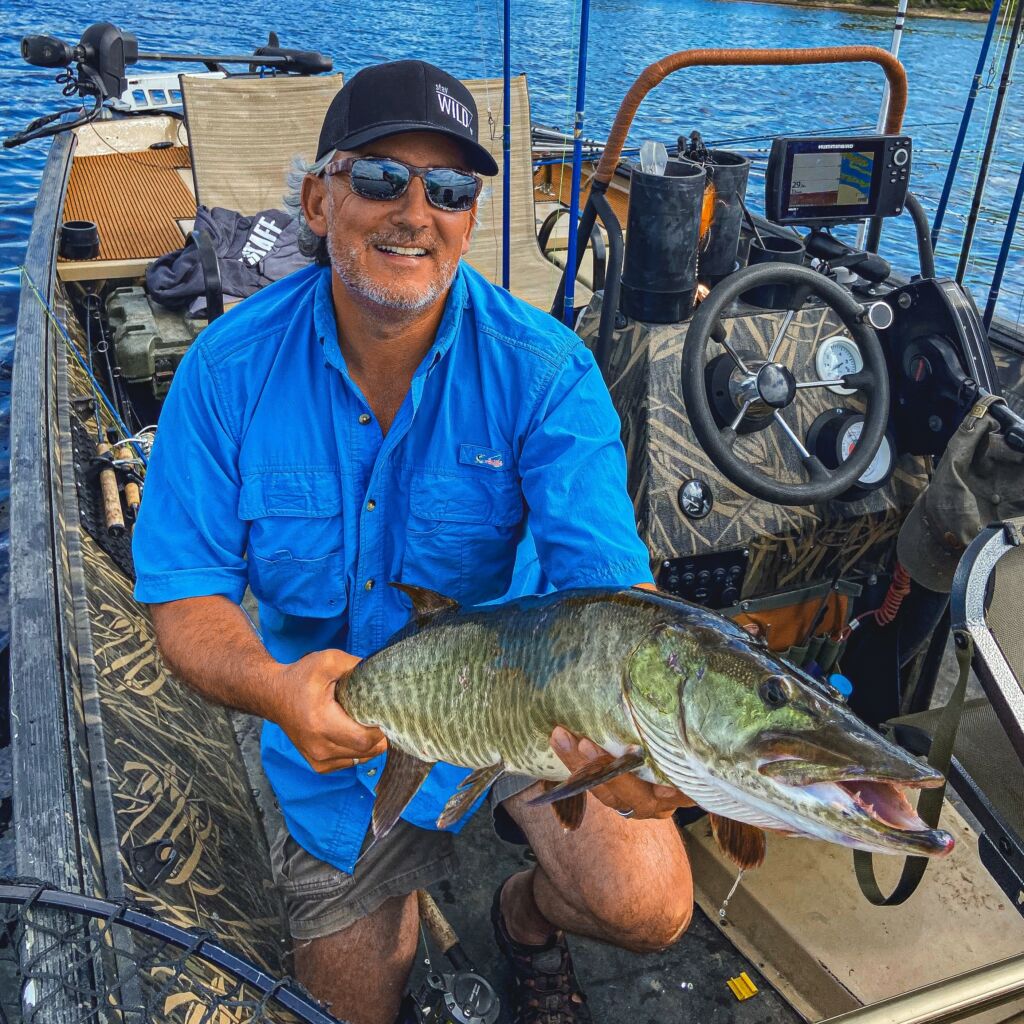 Ten years ago, in 2012, the St. John River was featured in the Musky Hunter Magazine as being home to potentially the largest Musky fish – holding the world record for size. And because of the depth and the diversity of the Saint John region’s river system, those fish have had an opportunity to keep growing.

“Musky have only been in the river for a little over 40 years,” Pete explained. “They originated in Lac Frontiére, and it’s my prediction that in the near future we’ll have people that will fly here from all over the world to try and find that fish. They will release it and it will be the pursuit of every Musky angler in the world.”

According to the St. John River Chapter Muskies Canada, the large fish is already attracting tourists, with known groups of anglers from Ontario spending days adventuring on our rivers fishing Musky. 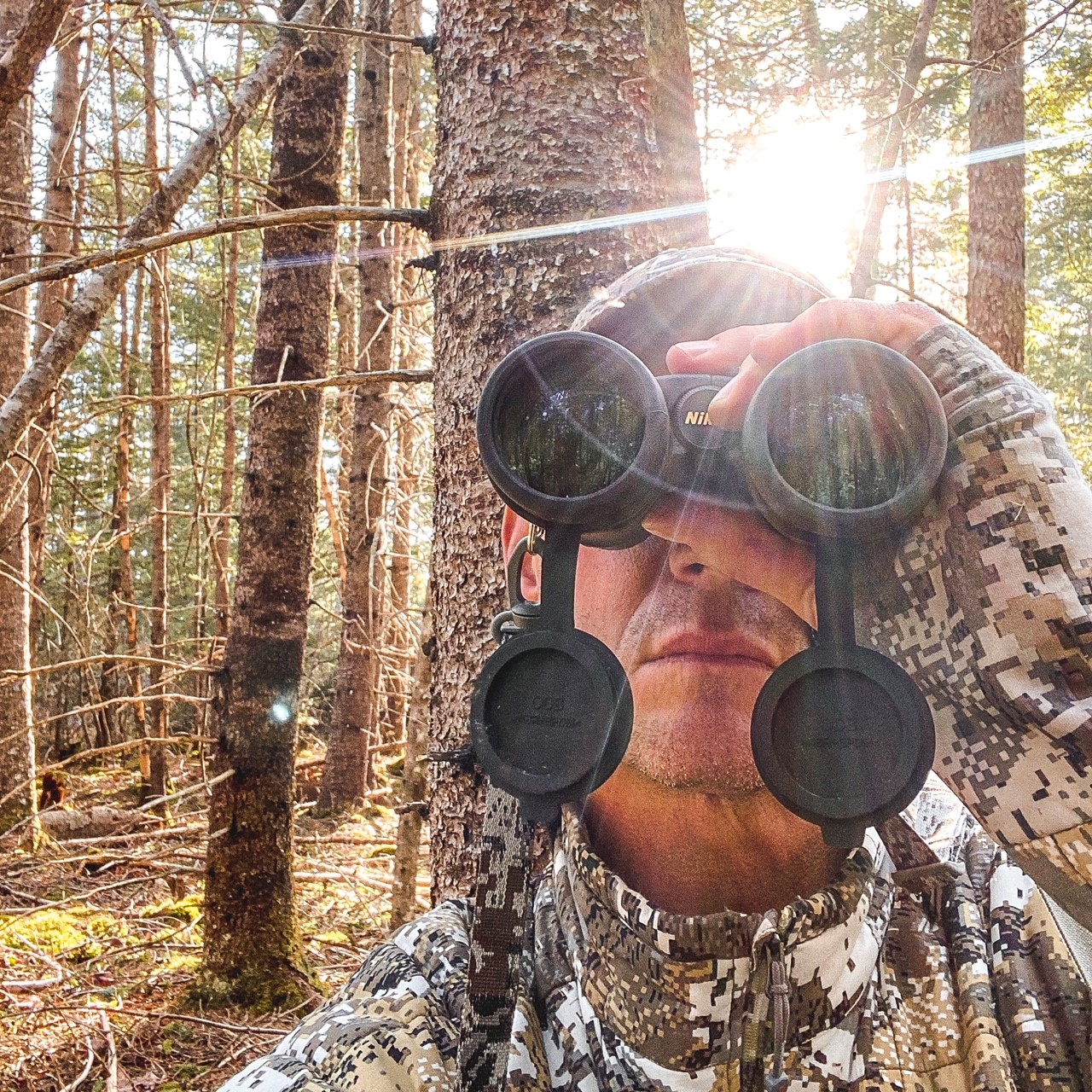 Pete Stoddart taking in all of the adventure close to his home in the Saint John region. (Photo submitted)

The Saint John region and the province of New Brunswick is also home to the densest Black Bear population in North America. Residents and visitors have the opportunity to get up close a personal through guided hunts with outfitters located within 30 minutes of uptown, Saint John – the region’s urban core.

A guide is required if you are not a New Brunswick resident. A full list of guides in the Saint John region and province can be found here.

Excitement Around Every Corner

Pete shares how the wild explorations reach beyond hunting and fishing – they are experienced simply at the sight of an enormous animal in the woods.

He has been nose-to-nose with a cow and calf moose while spring fly fishing, witnessed big bears stumbling across a river, and has come face to face with a buck. According to Pete, there is never a dull moment.

“When a flock of ducks lands in the decoys before its even light out, it’s startling every single time,” he said.

The river system that runs through the Saint John region also leads into the Bay of Fundy, home of the world’s highest tides. 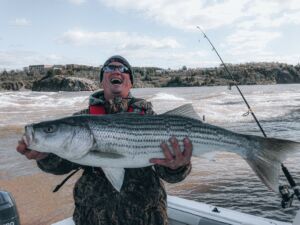 Pete Stoddart in the Reversing Falls Rapids with a Striped Bass. (Photo Submitted)

« Most people in the province would have driven by or driven over our waterways at some point in their life, but probably have no idea what’s actually in there, how beautiful it is, and the wildlife migration that takes place throughout.” Pete said.

Migration such as giant Striped Bass that travel through the Bay.

“I think that as New Brunswickers, we need to start looking at our province through the lens of a tourist, because when we do that, we will appreciate the things that we have,” Pete said.

For a closer look and visual of the incredible Striped Bass fishery in the Saint John region’s Reversing Falls watch an episode of The New Fly Fisher HERE.