All great ventures begin with an idea, and for Ray Gracewood, AREA 506 was an idea born from his experiences working and travelling throughout the province. And what began as a passion project, seeking to launch a festival celebrating all things New Brunswick, has developed into a staple brand for the Saint John region – and our province – attracting residents and visitors to experience music, culture, and goods.

Launching in 2016, AREA 506 has expanded its footprint and adapted in ways Ray never imagined. From pandemic pods to a Waterfront Container Village – the brand has gone beyond an annual event and is celebrating everything that’s cool about the port city.

Growing up in the region and graduating from UNB Saint John – Ray found his love for brand marketing in university and spent the first 12 years of his career working for Moosehead Breweries.

“I consider my experience at Moosehead a blessing because I think there’s very few companies, especially consumer packaged goods companies in Atlantic Canada, that can give you such a robust marketing experience,” Ray explained.

Travelling around the province through his work, Ray discovered the diversity that was in every corner of New Brunswick – which was another driving piece in the creation of the AREA 506 brand.

“When you think of New Brunswick, you don’t necessarily think about diversity, but it really exists,” he said. “When you get into the Francophone communities, the First Nations communities, and all the multicultural groups that exist, there’s a real diversity here.”

Initially Ray wanted to share his idea with stakeholders and help to get it off the ground. With a full-time job and four young kids at home, he didn’t picture running the show.

But according to Ray, once you conceive the idea, it’s really tough to let it go.

He shares how the volunteers that have been with him from the beginning have allowed AREA 506 to develop into what it is today.

“From the people helping with the site design, or delivering toilets, or pushing a broom at the end of the night or helping to book the bands – it’s the special volunteers doing this work that has allowed us to do what we’ve been able to do,” he explained. 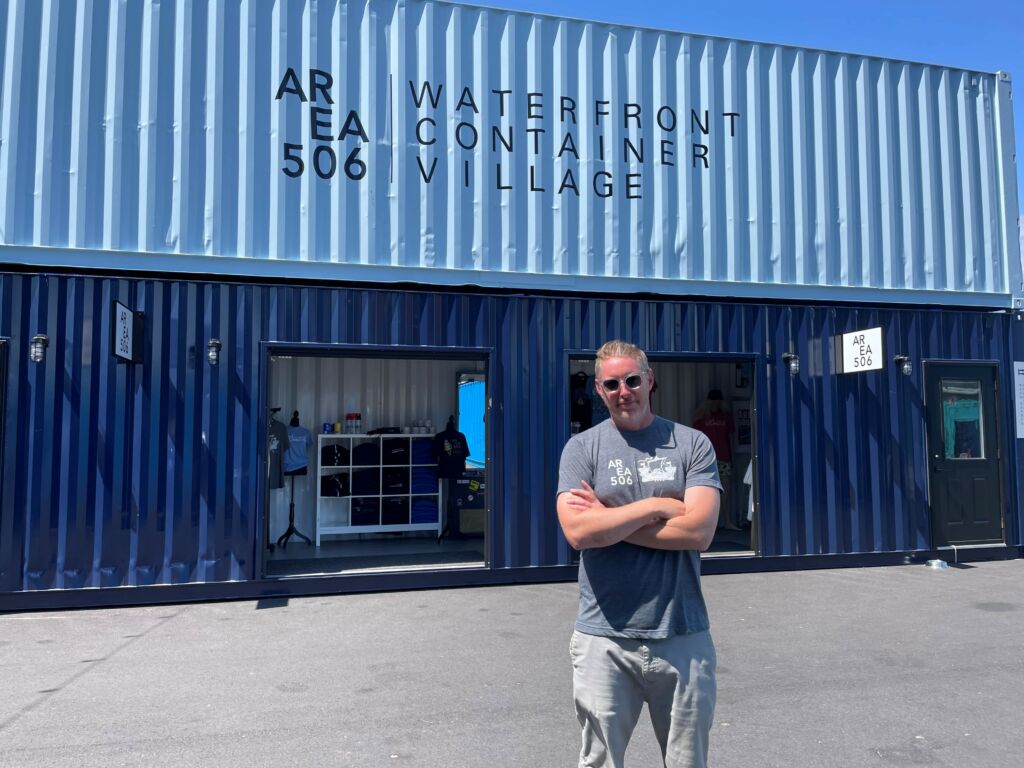 And he shares how it’s the volunteers and strategic partners that allow for continued growth and success.

“Whether it’s the business community, or strategic partners, like Envision Saint John and Port Saint John, who are with us every step of the way and super supportive. It’s from that kind of help and unity – where we all know the Saint John region needs to move in a specific direction, which allows for development and people attraction,” he said. “We’re in a good spot, but I think it’s only the beginning.”

And although AREA 506 is all about showcasing local – it’s also about supporting local and driving the economy in the region – with the Waterfront Container Village being built by local hands.

“It’s not a development company from Dubai or Toronto flying these containers and dropping them down,” Ray said. “Every container was painted by someone in Saint John, all the electrical, all the carpentry, all the welding, all of the engineering and the design, everything was done locally, right here in our region.”

“This is not only something for the city, but it’s by the city.”

AREA 506 kicks off its seventh annual New Brunswick Day celebration this weekend on the Saint John waterfront. Stay tuned for what’s in store from mover and shaker Ray Gracewood and his team – we don’t see them slowing down.

→ “I just never settle,” Ray said. The fact that we haven’t had Pearl Jam yet is still a problem.”